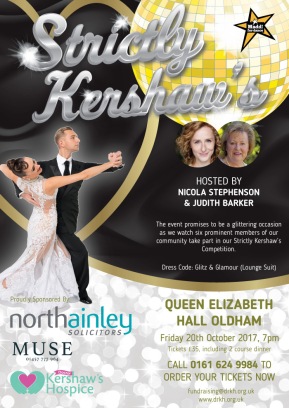 IT WAS certainly up there as one of the most unexpected phone calls I’ve received since becoming Council Leader.
In April I took a call fully expecting to be asked whether I had PPI, a car accident that wasn’t my fault or be told about a new pothole in my ward. Instead it was an invitation I really hadn’t expected.
It was Dr Kershaw’s Hospice calling to ask if I’d consider taking part in their Strictly Kershaw’s annual dancing competition.
Ordinarily I would probably have politely declined given my busy schedule – not to mention my two left feet – but their timing was important.

The call came during the week of the funeral of our Royton councillor colleague, Tony Larkin, who I knew had been in Dr Kershaw’s Hospice during his final weeks.

It felt right to take part in something that raises funds to support the fantastic work of the Hospice. I know there are so many families across our borough who are grateful for the incredible work done by their staff for adults with life-limiting illnesses.

In the back of my mind too I remembered how, as a young girl, my Mum had sent me to Bardsley Dance School and – to be honest – I’d hated it! But I said “Yes” and committed to 12 weeks of practice every Thursday night up until the actual  event on October 20.

And in July I put my dancing venture forward as my pledge to the Greater Manchester (GM) Moving campaign, which aims to get everyone active and secure the greatest improvement in the health, wealth and wellbeing of the region’s 2.8m residents by 2021.
I turned up for my first practice sessions a bit apprehensive but actually, whilst I’m no Ginger Rogers, I really am enjoying it.

I have a fantastic, patient dance partner and he and his real partner have been taking me through the choreography for my two dances. These are the Cha Cha Cha and a lesser-known dance called the Bachata.  I have to say some of the choreography is a bit racy and they are already talking fishnets and feathers for my outfits!

I’ve certainly felt fitter for doing it and it’s good sometimes to have something that you need to really concentrate on (because otherwise you might fall over!) and take just a couple of hours off from being Council Leader.
So this has been great fun to do so far and – on the night –  I promise nothing other than 100 per cent effort and to provide some entertainment for the crowd  And I hope that however well (or not so well!) I have improved by then, people will remember the serious side to this is about raising funds for Dr Kershaw’s.

The Hospice needs to raise a staggering £8,000 daily to keep providing their invaluable services for free. They rely on public generosity and that’s why I hope some of you reading this will take the time to visit my JustGiving page and sponsor my dancing efforts here.

Even better, if you want to attend the Strictly Kershaw’s event itself, it takes place at the QE Hall on October 20. You can book tickets and find out more about it here.
While we’re on the subject of a Royton institution this week I want to set the record straight on our plans for the library building, which we recently announced.
You can read all about them here but essentially the plan is to move the library into the ground floor of the Royton Town Hall buildings as part of a £2 million investment to improve the facilities. We’re then seeking a tenant to give the old library building a modern use to breathe new life into the district.
Contrary to media and Social Media comments since then, I want to be crystal clear about what we are doing.
Firstly, this isn’t the closure of the library service. It is simply relocating it – and into what will be a modern community venue with new facilities, meeting rooms and office space set within the historic Town Hall building. It will have better access for everyone and improved connectivity between the library, health centre and leisure centre facilities. This is an investment in the future, not a cut in service.
Secondly, we have no plans to sell the old library building. We know it’s important to many Roytonians and have been very clear that we are seeking a tenant with a sympathetic view to its heritage who can offer something new to the district that can benefit everyone.
And with that off my chest it’s back to work now and – tomorrow night – a little more Cha Cha Cha…

THE DEATHS of people in public service – known to us or not – always serve as a shock reminder of our own mortality.

Last Wednesday afternoon, whilst preparing for Full Council, I was alerted to news of the terrorist attack underway in Westminster.

Like many others I watched the horrific scene unfold as four innocent people were killed and many injured after a lone attacker drove his car at pedestrians and then into railings outside the Houses of Parliament.

The heroic actions of unarmed PC Keith Palmer, who bravely fought to stop the man entering the Palace of Westminster, touched us all.

As Full Council began at 6pm with a minute’s silence, the facts were becoming clearer. I was able to report that all three of the borough’s MPs were safe, but the atmosphere remained one of great shock and solemnity.

It soon emerged that PC Palmer’s selfless example was not an isolated act. Witnesses told how police and other emergency responders ran towards danger at the scene while directing the public in the other direction – and there were heart-warming stories of folk stopping to help those lying in distress.

PC Palmer’s efforts to protect the public were rightly highlighted, but his sacrifice also makes everyone feel uneasy and vulnerable.

It reminds us all of humanity: that no matter how healthy, professional and well-trained we are, our ultimate fate can be incredibly random. 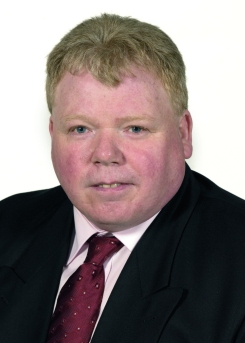 Councillor Tony Larkin had been known to be seriously ill for some time but that doesn’t make his departure any less sad.

A staunch and campaigning trade unionist, Tony was originally from Manchester but he took Royton to his heart and local people did the same: re-electing him to serve to them several times since 1996.

He was incredibly passionate about where he lived and, believe me, Tony never passed up an opportunity to lobby for a local cause on his residents’ behalf.

He was also a great listener and a man who saw representing people as a very serious public duty.

I know how difficult this time must be right now for his wife Penny, their three children and their family and friends. My heart goes out to them all.

In contrast, the loss of Carrie Sutton, Oldham Council’s director of Education and Early Years last weekend, was completely out of the blue and has stunned everyone.

Carrie joined us in August 2015 and impressed many people, myself included, from day one.

Honest, passionate and no-nonsense in the pursuit of the right outcome, I knew almost instantly that she was someone I was going to enjoy working with.

Carrie had such determination and drive and worked tirelessly with partners like school heads and governors to improve young people’s prospects.

And she will be equally fondly remembered here for her personality as well as her work ethic. My sincere condolences go to her family and anyone fortunate enough to have known her.

At a time when we’re repeatedly told that people trust their public institutions and personnel less than ever before, examples of good public service like these – their values and  behaviours – shine light on the best path towards us regaining that trust.